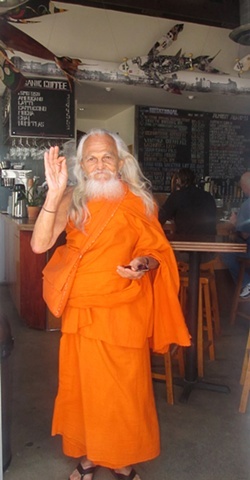 I met him back in 1975. He always wore a white colored full-length robe draped over one shoulder, much like those adorned by Buddhist Monks (rvmann.com/artwork/4125381-chicago-Baba…). Naturally unshaven from birth, he appeared as a peaceful person. He would always sit on the same Boardwalk bench facing toward the ocean. When I mentioned of him to local residents, they merely replied that they did not know much about him other than those locals' that had nickname "Baba" and that he has taken a vow of silence.

I respected his wishes and always considered him as an iconic being for peace. I knew that when I would visually see him and symbolize by his presence (similar to the good luck feeling after viewing a dolphin at sea) I realized at least The World Wasn’t Going To Hell In A Hand Basket after all and there was some room for tranquility and redemption.

I've always thought that |Chicago Baba| had a subconsciously profound influence on my creating my “Dreamer” image. rvmann.com/artwork/2505319_Dreamer_Mult…