This image is a visual-prediction-compilation of metropolises within the Los Angeles metropolitan area. From the top to the bottom it is digitally compiled in rows reading from Downtown through Mid Wilshire, West Hollywood, Westwood, Santa Monica and it’s promenade and finally the Venice Beach Boardwalk at the lowest area.

Imagine if you will that 10,000 years ago the greater Los Angeles area was a mere open swamp.

If commercial high-rise development proceeds at the rapid rate it has been evolving for the last fifty years, the current Los Angeles metropolitan areas will fill in its domestic land space and leave LA no choice but to become a massive Megalopolis. Until then it remains now as a collection of Metropolises.

The progressive ocean water levels that are rising due to the predictable global warming that is melting the frozen North and South poles, could re-flood this basin within another fifty years created by a blindly overseen and ambiguously unprepared natural disaster, leave LA as an open swamp once again.

What goes around comes around!

As the current population growth increases at a rapid perpetual rate, development of our metropolised, urban communities will eventually merge together and become a non-vacant open land spaced sacrificial megalopolis. The destiny of urban domestic property may evolve into a high rise society. en.wikipedia.org/wiki/World_population

In time, there may be no civic land to roam on? 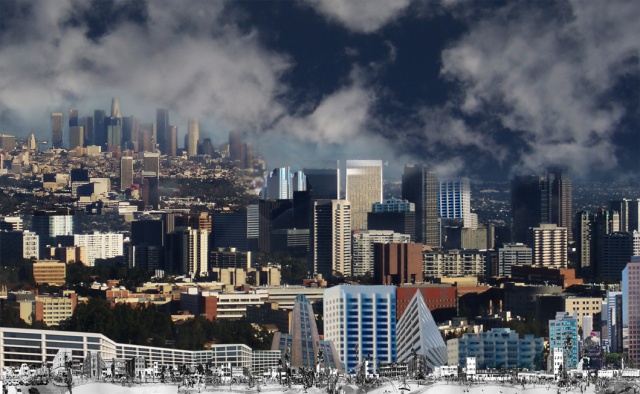 A future perspective of an urban metropolis void of any vacant land.
< previous next >