This sketch came about after an incident from a clumsy experience. As technicians we occasionally performed maintenance duties on the lighting equipment used on a production. I was working on a new show and was not too familiar with the operations of that particular sound stage. A light burned out in a stationary lamp in the high rafters and It was requested of me to change the ten-kilowatt bulb, the size of a large beach ball. I had replaced them many times before, but this was the first time I worked within the ceiling of a 80 foot high stage. Being a little nervous, I opened the front lens, removed the bulb and my sleeve got caught in the lamps housing. After losing my balance the bulb slipped out of my hands and landed next to an older laboror seated in a chair below. With a tremendously explosive crash that would have even given a young man a heart attack. We all survived, but due to that incident later I was better know as the, "Lamphead." That experience was the inspiration to sketch this "Lighting Explosion" and followed by the illusive painting seen next as "Ice Cream In Hell". 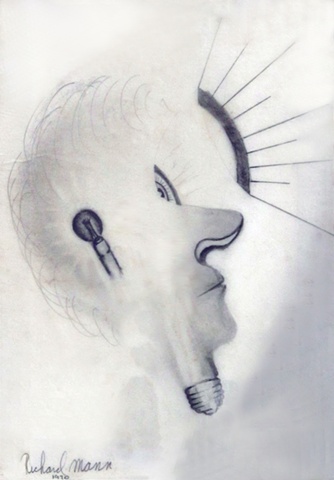