Ice Cream In Hell was influenced by my reputation, peers and nick-name of being labled as the Lamp-head throughout all of the major studios I worked in because of the fumbling butterfingered explosion accident that I was involved in. "Lighting Explosion" and a sketch during the filming of Jack Webb's Dragnet which inspired my painting the "Ice Cream In Hell."

I went many amusing months with a jacket-title that labeled me as a "Lamp-head" before it became old and finally wore out it's welcome. I've always considered being lucky to have acquired a studio job after returning home pennilessly from the Navy. My uncle was a studio carpenter and made the proper connections to pull me into the lighting union. At times it seemed as though it was a surprising reward and a fortunate endeavor of love, while equally discovering it simultaneously interfered with any aesthetic endeavors (art), which was an infernal-demonic-torture. I ignored having to endure laboring for the film industry because it financially allotted me the funds to be able to afford my passion of sports cars, motorcycles, Hot Rods and the downtime at work to sketch from my inner most thoughts and experiences. 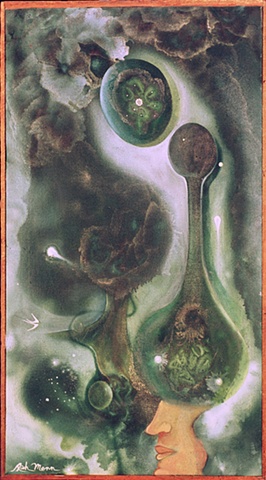 "Ice Cream In Hell"
< previous next >