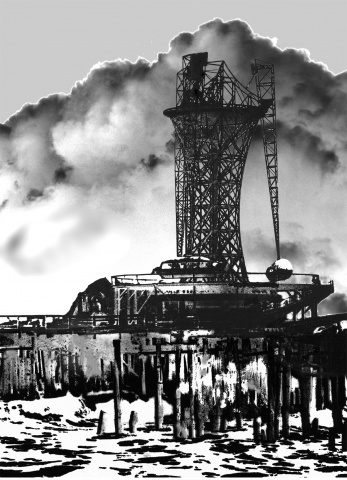 “Mahi Mahi” (named after a Hawaiian fish) at the historically festive P.O.P. (Pacific Ocean Park, a vanished amusement pier in Venice/Santa Monica, Calif.), was one of many rides that amused people from a mundane standard of life into a purely ecstatic gratification. The tall base of this euphoric ride would rotate, gain enough momentum for the three arms with fish cars attached at their ends to strategically rise, increase with speed, and allow the cars to spin and rotate as the arms became fully extended. To ditch school and head for Venice and POP was the most novel education of its time.

In 1967, due to a series of destructive fires and yo-yoing investments that tortured the park’s promoters, POP finally closed forever. Lengthy attempts were made to remove POP, yet the Mahi Mahi carcass, and it’s pier pilings lingeringly remained as a monument to it's previous life. Fifteen years of pounding waves created an ideal surfing environment there, but eventually being totally demolished in 1975. “The Cove” (named for this naturally sculptured surfing / playground by the sea), adopted a, “No trespassing” stomping-grounds attitude, for locals surfers there. This mutually self-respected, decaying landmark was vigilantly surfed and defended locally by an established group know as the.........Z-BOYS (Abbr. ZEPHYR SURFING TEAM) and vaguely bordered by their turf and so called name as,. . . .“DOGTOWN.”

Also located in the background at the "Doors" concert and Wikipedia on: rvmann.com/artwork/269231_The_rock_grou… en.wikipedia.org/wiki/Pacific_Ocean_Park