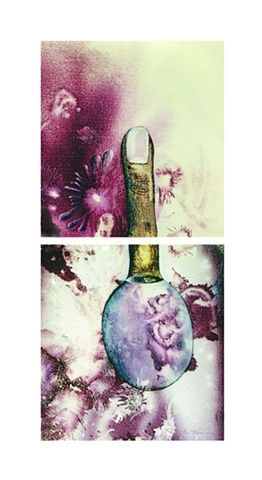 Born in Hollywood Ca., my family relocated to Beverly Hills in 1956. Shortly afterwards I started sketching and oil painting. In 1970 before the premier releasing of my art, my first client, Robert Vesco, and sold him this two-piece air-brushed diptych oil painting titled "My Crazy Life" in a supermarket parking lot adjacent to the famous Sunset strip. After the sale was completed I gave him my phone number for contacting me in the future, thinking he might want to purchase more art. He called that week and invited me to meet him at a café. His ulterior motive was more than just an art or social visit. He bluntly offered me $10,000 to fly in his jet to South America and return with a large quantity of cocaine. Shocked by his proposal, I declined his offer and explained that I had to be at work on the TV series “Dragnet.” At that time I had just started working for Jack Webb, the producer. It was a quick response that put up caution flags in the conversation. After recently returning home from the Navy I became fond of my freedom once again and I did not wish to sleep in another bunk bed or wait in line for my meals, perceptively in PRISON! It would have been like jumping from one frying pan into another. I dodged that bullet even though the pay at Dragnet was considerably less the alternative had a safer reward. Webb was a great employer. He allowed me to sketch while we worked. Vesco became a legend after that brief encounter. Even though the painting was initially created prematurely to Vesco's business proposal and the art transaction, "My Crazy Life," coincidentally came after and aptly described the same type of situation at the same precise period of time.

“My Crazy Life” was a prognosticated illustration. The top analytically perspective painting titled The Reasoning Of Decisions juxtaposed by the bottom painting titled, Innovations At The Beginning Of Life which represents symbolic interpretations by virtue of the egg shaped image as unpredictable ideas and imaginations awaiting their birthing. The backgrounds observed in both sections are representations that include all of our involvement and experiences from the past, present and future.