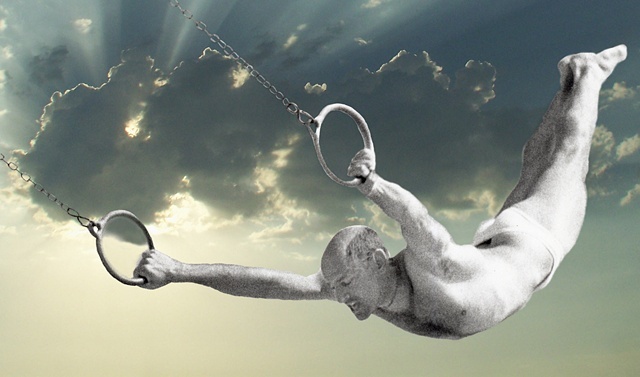 This esoteric former Olympic-Gymnastic event is similarly related to a combination of still rings and trapeze that has been internationally active since the 1800s and as far back as the ancient Roman games. As an aesthetic-athletic-activity it has been locally practiced and performed at the Venice and Santa Monica California Beaches and over private swimming pools since the early1900s.

At age fourteen, I won first place on the “Flying Rings” at the AAU International Gymnastics Competition in 1959 at the Pasadena City College. Elated with pride, shortly afterwards I was invited to perform as an individual, demonstrating performances of the “Flying Rings” in the 1968 Mexico City Olympics. The same year I won my title (1959), there was a banning of this event from all Olympics, AAU, NCAA and public schools from any further competition as of a result of an increase in fatalities and serious injuries at indoor gymnasium competitions due to having to brutally dismounting the apparatus at heights of over 30 feet and landing on a matted surface. At the beaches landing in the sand was less lethal and over swimming pools completely risk-free and even more enjoyable. I went on to continue to exercise and teach this obsure activity at local beaches, to circus performers and privately for the following 35 years. After a ten-year hiatus from performing and teaching this esoteric "Flying Rings" I am returning to teach again and possibly judging competitions and similar events.

Some of the archaic-amateurish videos here were recorded with hand held cameras and converted to YouTube movies. They were originally collected on tape from the 1970s through the 1990s of the esoteric and aerial acrobatics previously executed at the beaches and poolsides depicting this enjoyment of skills, amusements and entertainment.

It seems ironic that in this wonderful country of ours, the major enthusiasm and interests have shifted away from assertive innovative aesthetic athletics and more toward team and aggressive sports. It is sad to think that today’s interests do not encourage individuals to be more personally interested and amused by the more legendary sport of gymnastics.

Even though these non-competitive abilities are seldom witnessed, it would be encouraging to know that this amusing and aesthetically pleasing recreation will be carried on and passed along to others and new flyers to come. Maybe someday it will be safely reinstated to all gymnastic venues of sports, performances and appreciated by a multi-genderal audience.

"Still Rings* are curently a remaining rings event in gymnastic competitions: whysored.blogspot.com/2011/04/albert-az… Scroll and click on Albert Azarian and many others will play on a video collection.