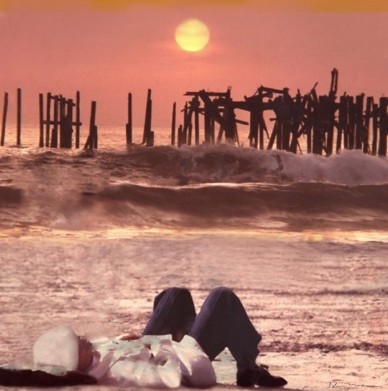 The Z-Boys Surfing Team rode and defended their turf at "The Cove." adjacent to the enduring P.O.P. pier piles in Venice Ca..

Relaxation was a prerequisite for spectators to view this active lifestyle and amusing pleasurable excitement. When I think of the term "Dogtown the local Z-boys (abbr. Zephyr Surfing Team) reminds me of the surfers and skateboarders that I had been associated with at the Cove located south of P.O.P. (Once a former Santa Monica Ca. Amusement Park Pier / Park) located on the borderline between Venice Beach and Santa Monica Beach.

Many references to the origin of the term Dogtown mis-stereotype the locals, who surfed at the Cove, as gang members. The surname of The Cove came about by way of the sub-aquatic surface floor shape there that formed perfect waves to ride. The lingering pier piles were responsible for that unusual surface. The local surfers would tag the Cove-area with spray-can graffiti stating, "For Locals Only" and that all others would enter into Dogtown at they're own risk by surfing there who didn't reside in Venice. In other words, if a surfer wasn't from Venice like in the expression "You're In a Doghouse" meaning you're not welcome at The Cove and merely in . . . "you're own little Dogtown."

The name Dogtown was coined by some of the locals to illustrate and discourage non-locals that they would be entering into a pit-bull-dog-like-arena and should become aware of the consequences that may arise. Even though outsiders, non-locals, and tourists alike have misinterpreted, labeled, and referred to Venice Beach as the Dogtown-Area, the term was never originated and intended to describe Venice Beach's geographic location, but rather carried a reputed jacket and labeling of being a state of mind.