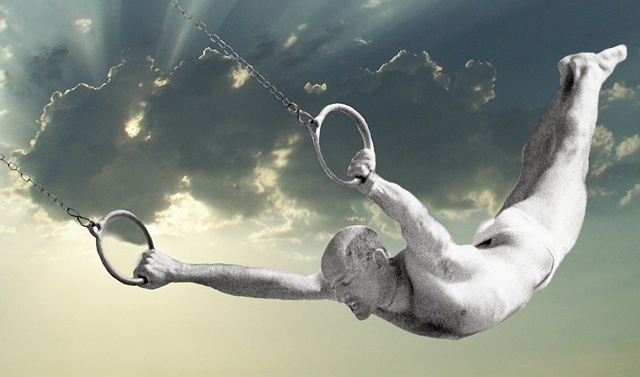 Previously, this Olympic-Gymnastic event, related to the "Still Rings" and "Trapeze", the “Flying Rings” had been active internationally since the 1800s and the ancient Roman games. This aesthetic-athletic-activity has been locally practiced and performed at the Venice and Santa Monica Beaches and over swimming pools since the early1900s. Due to an increase in fatalities and serious injuries at indoor gymnasium competitions this event was banned from NCAA, AAU and Olympic competitions because of the dangers of dismounting the apparatus at a height of over 30 feet and landing on a matted surface. At the beaches the landings are cushioned by the sand and over swimming pools by water. www.youtube.com/watch?v=DWVKBXDlVLk www.youtube.com/watch?v=dm_EaNQPOKI

It seems ironic that in this wonderful country of ours, the major enthusiasm and interests have shifted away from creative athletics and toward team and more aggressive sports. It is sad to think that today’s interests do not encourage individuals to be more personally interested and amused by the more legendary sport of gymnastics.

Some of the archaic-amateurishly recorded YouTube transferred video-imagery was originally collected on tape from the 1970s through the 1990s. These esoteric and aerial acrobatics previously executed at the beach and poolside outdoors “Flying Rings”, depicts as evidence to it’s former enjoyment as a Southern California amusement.

Even though these non-competitive skills are seldom witnessed, it would be encouraging to know that this amusing and aesthetically pleasing recreation will carry on and passed along to others flyers.