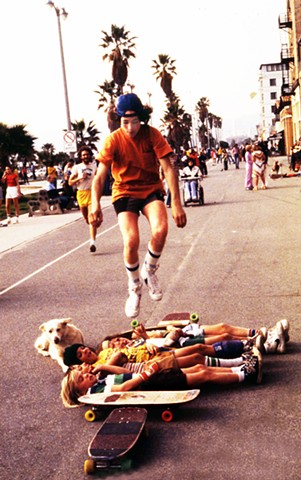 Historically, before skateboard parks were developed and the Venice Beach Boardwalk became touristically popular, occasional amusements appeared. This cast of thrill seekers put on a brave show as the passers by enjoyed their youthful risktaking skills. Take notice of the intensly focused-dog, who was probably wondering whether or not the ariel artist hurdling over the fearless thespians, would succeed gracefully? Passing the hat was an exceptable consideration for numerous donations and complimentary audience applause. Their breathtaking courage earned them enough pocket money to split up for a day of challenge and fun!